The rules set by the CACM Regulation provide the basis for the implementation of a single energy market across Europe. It sets out the methods for allocating capacity in day-ahead and intraday timescales and outlines how capacity will be calculated across the different zones. Putting in place harmonised cross-border markets in all timeframes will lead to a more efficient European market and will benefit customers.

According to Art. 10 CACM, TSOs cooperate with Nominated Electricity Market Operators (NEMOs) to organise the day-to-day management of the single day-ahead and intraday coupling. ENTSO-E facilitates the discussion. Although the overall governance structure of the single intraday and day-ahead coupling has been previously agreed, the governance principles were jointly agreed by NEMOs and TSOs in the first quarter of 2019. This work helps jointly organise the further development of the market coupling by defining the responsible bodies and classifying of the decisions to be taken by each body, as well as helping to define the criteria for prioritising the functionalities to be developed.

After ACER’s decision of January 2019 on the all TSOs proposal for a single methodology for pricing intraday cross-zonal capacity in accordance with Art. 55.3, requesting amendments to the “TSOs’ common set of requirements for an efficient capacity allocation in the intraday timeframe”, TSOs developed the requirements and submitted them to the NEMOs. The requirements were included in the annex of the algorithm methodology submitted by the NEMOs in July 2019 in accordance with Art. 37.

Submission to ACER of the amendments to ­Algorithm Methodology

In accordance with the CACM Regulation, in 2019 CCRs delivered day-ahead and intraday capacity calculation methodologies (Art. 20.25), methodologies for coordinated redispatching and countertrading (Art. 35.1) and redispatching and countertrading cost sharing methodology (Art. 74.1). After an amendment request from all NRAs, in January 2019 all TSOs submitted the final version of the methodology for calculating scheduled exchanges resulting from single intra-day coupling” in accordance with Article 56.1.

5 Article 21.1 provides with further details on the expected content of the proposal.

The CACM Cost Report 2017 and the CACM Cost Report 2018 submitted to NRAs respectively in April 2019 and in September 2019 in accordance with Art. 80(1) of the CACM Regulation includes the costs of coordinated activities of all NEMOs and/or all TSOs, and costs incurred for activities performed by NEMOs or by TSOs and NEMOs in a certain region, in relation to single day-ahead and intraday market coupling.

In August 2019, ENTSO-E issued the 5th edition of the annual report on the progress and potential problems with the implementation of FCA, single day-ahead coupling and single intraday coupling (a “Market Report”) in pursuance of Art. 82(2)(a) CACM and Art. 63(1)(a) FCA. Furthermore, a biennial “Report on Capacity Calculation and Allocation” was submitted to ACER in August 2019 in accordance with Art. 82(2)(b) and 31(2) of CACM and Art. 63(1)(c) and 26(1) of FCA.

Submission to NRAs of the CACM Cost Report 2017

Submission to NRAs of the CACM Cost Report 2018

Submission to ACER of the ENTSO-E Market Report

The FCA Regulation, which entered into force on 17 October 2016, sets out rules regarding the type of long-term transmission rights (LTTRs) that can be allocated via explicit auction, and the way holders of transmission rights are compensated in case their right is curtailed.

The overarching goal is to promote the development of liquid and competitive forward markets in a coordinated manner across Europe and provide market participants with the ability to hedge their risk associated with cross-border electricity trading.

Following the all NRAs’ request for amendment to the joint proposal for a methodology for sharing congestion income from FCA (Art. 57.1 FCA), all TSOs submitted the amended version in March 2019 and all NRAs approved it in May 2019.

All TSOs have elaborated a reviewed Harmonised Allocation Rules (HAR) proposal which was submitted in July 2019 and approved by ACER in October 2019, in accordance with Art. 68.5 of the HAR.

Finally, ENTSO-E has coordinated the preparation of the All TSOs’ proposal for the methodology for sharing costs incurred to ensure firmness and remuneration of long- term transmission rights pursuant to Art. 61 (FCA).

ACER approval of the reviewed HAR

Efficient balancing markets, in which all resources are empowered to participate on a level playing field, shall ensure security of supply at the lowest cost and can deliver environmental benefits by reducing the need for back-up generation. The Electricity Balancing Regulation (EB Reg.) sets a framework for common European rules and European platforms for cross-border balancing markets. The balancing processes are organised in the following steps:

9 The Guideline includes FCR in the balancing energy process but does not provide for an associated common platform. 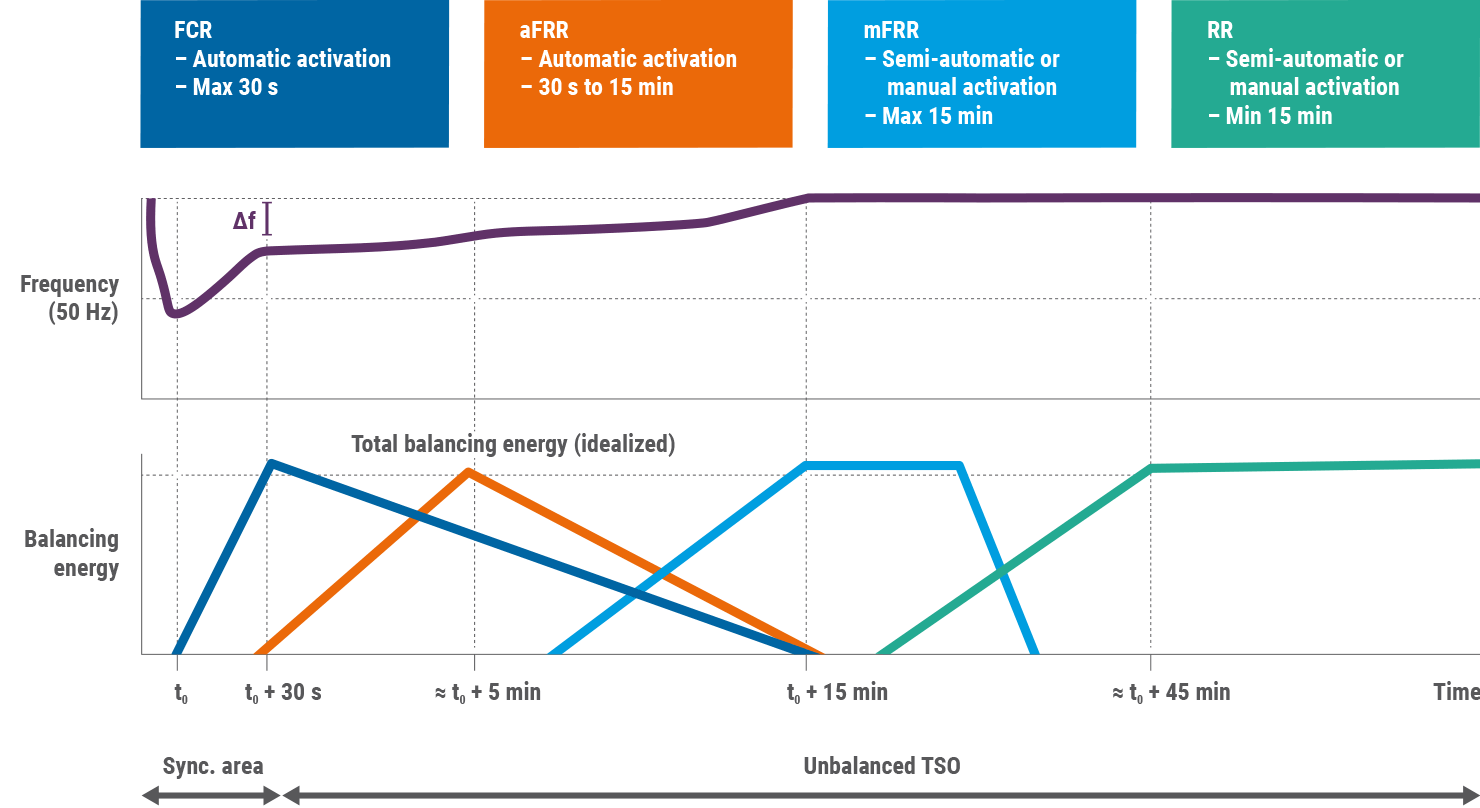 Ongoing or planned implementation activities include the development of several methodologies by all TSOs, with ENTSO-E acting as facilitator, as well as the implementation of the European balancing platforms.

10 The platform was made operational in January 2020.

European platform for the exchange of mFRR and aFRR energy – Manually Activated Reserves Initiative (MARI) and Platform for the International Coordination of ­Automated Frequency Restoration and Stable System Operation (PICASSO): In accordance with the submission by all TSOs of the methodology proposals for implementation frameworks, pricing and activation purposes of balancing energy bids and TSO–TSO settlement of exchanges of balancing energy and the IN process, implementation of the platforms continued throughout 2019 (Art. 20.6 and 21.6 EB Reg.).

Transparency of capacity calculation by TSOs

The CEP, with the new Electricity Regulation, introduces a new regulatory framework for cross-border capacity calculation. Specifically, Article 16.8 demands that at least 70 % of the interconnection capacity shall be made available to the market (respecting operational security limits of internal and cross-zonal critical network elements and considering contingencies). The total amount of 30% can be used for the reliability margins, loop flows and internal flows on each critical network element.

In 2019, ENTSO-E and TSOs worked to develop a consistent approach across the regions towards Art. 16.8 with regard to its understanding, implementation and monitoring of compliance. ENTSO-E and TSOs also engaged in constructive discussions with ACER and NRAs on this topic.

All NRAs requested in December 2019 the re-submission of the proposal. Exchanges of view with stakeholders took place before and after submitting the above-mentioned proposal.

12 The proposal was re-submitted in February 2020.

In 2019, ENTSO-E developed six methodologies, common rules and tools for the participation of foreign providers in capacity mechanisms.

As required by Art. 26.11 of the Electricity Regulation, ENTSO-E shall submit such methodologies to ACER by 5 July 2020.

The Inter Transmission System Operator Compensation (ITC) Agreement is a multiparty agreement concluded between ENTSO-E on the one hand, and ENTSO-E members and TSOs that comply with the Union law in the field of electricity or with the previous agreement on ITC, also referred to as “ITC Parties” in this context on the other,. It offers a single framework where European TSOs compensate each other for costs associated with hosting transit flows (i.e. facilitating the transfer of electricity between two countries). This mechanism aims to incentivise the hosting of cross border flows and thereby facilitates an effectively competitive pan-European electricity market.

The ITC Agreement provides for an annual process in which the parties are required to provide and check the values for the calculation of the annual perimeter fee. Based on the preliminary data, the transit flows, also including the perimeter flows, are calculated (i.e. imports and exports of electricity to and from third countries).

ACER publishes an annual monitoring report on ITC. To this end, ENTSO-E provides ACER with information on both quantitative data (preliminary and final data) and descriptive information (e.g. explanations for capacities not allocated according to Guidelines).

This Annual Report covers the period from January to December 2019. It focuses on the legal mandates given to ENTSO-E. Activities covered in this report have been performed thanks to the 42 members of ENTSO-E who provide its financial resources and whose staff provides expertise to the Association. 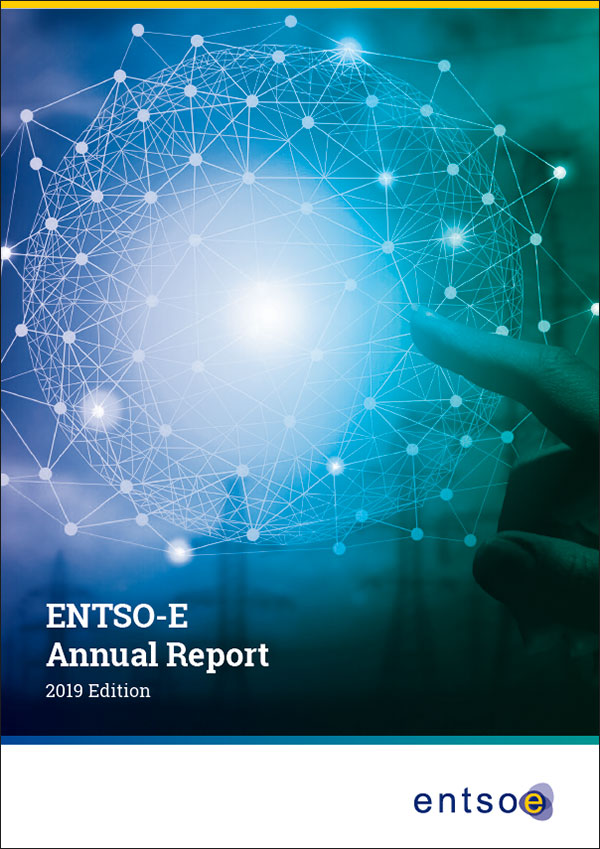 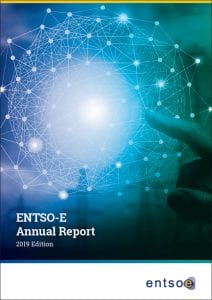